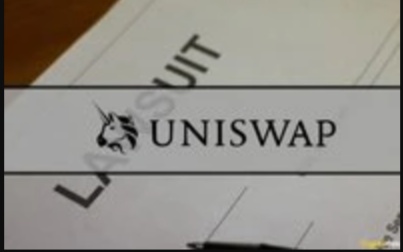 Uniswap, a DeFi giant, is accused of marketing unregistered securities and neglecting to warn its customers about the risks involved.

Between May and July of last year, Nessa Risley, a Uniswap user from North Carolina, invested around $10,400 in low-cap digital tokens like EthereumMax, Matrix Samurai, and Rocket Bunny. Since then, the trader has suffered "significant losses," prompting him to seek legal redress.

Risley filed the lawsuit on April 4th, stating that Uniswap failed to conduct identification checks and apply securities restrictions on "fraudsters" who utilize the platform to advertise scam-like digital tokens in order to commit widespread fraud.

Uniswap has been accused of selling securities that have not been registered with the Securities and Exchange Commission.

Two US law firms have filed a lawsuit against Uniswap, accusing the decentralized exchange and its backers of "violating the securities laws by issuing and selling securities in the form of digital tokens," including well-known venture capital firms like A16z and Paradigm.

The case, filed by Kim & Serritella LLP and Barton LLP, seeks to bring victims like Risley, who have lost money on Uniswap since April, into a class action lawsuit against the platform's founders and developers. It claimed that Uniswap had neglected to provide "registration statements," which included information about the risk of the securities they were selling to users.

Uniswap Labs has also been accused of allowing illegal practices such as "pump and dump" and "rug pulls" to take place on its platform, according to the class action. One of the main claims is that the DEX's pricing structure encourages fraud by paying liquidity providers a percentage of the cost for each trade, according to the statement.

Meanwhile, Uniswap collects developer fees and has the option of keeping a portion of those payments for itself. Because of the competing interests, Uniswap could be seen as a silent enabler of scams.

The SEC is keeping an eye on Uniswap.

The case mentioned above isn't the first to question the decentralized nature of DeFi protocols. In January, a software programmer named Joseph Kent filed a lawsuit against PoolTogether, a gamified crypto savings protocol. Kent claimed that the network's practice is effectively a type of lottery, which is illegal under New York law.

Last September, the SEC launched an investigation into Uniswap Labs, with the goal of determining how customers used the exchange, how it was advertised, and how it operated in general. Gary Gensler, the chairman of the Securities and Exchange Commission, had previously expressed concerns about DeFi protocols, which he believed may be classed as the types of companies that the Commission regulates.